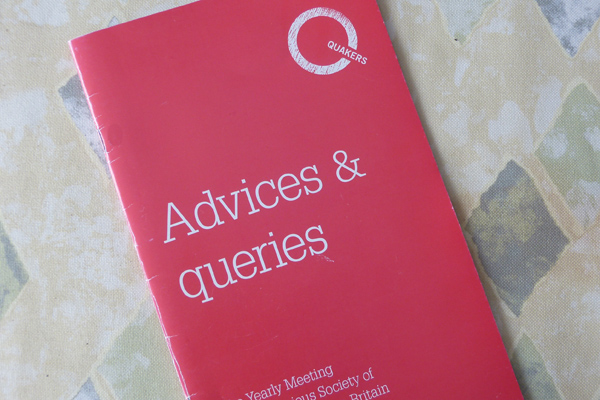 ‘Be honest with yourself. What unpalatable truths might you be evading? When you recognise your shortcomings, do not let that discourage you. In worship together we can find the assurance of God’s love and the strength to go on with renewed courage.’

This passage from ‘Advices and Queries’, the booklet of guidance and reflection for Quakers, was read aloud by a Friend at Newbury Meeting. For the rest of the meeting I thought about that word – “courage”. I thought about the courage of my Grandfather’s brother Joseph, who was killed in World War One when he went into battle unarmed, as a stretcher bearer. Then I thought about the obvious courage of a person who is battling a terrible illness, and how we can feel enormous sympathy. And I thought about the courage of our friend Ruth who, at 104, raised a great deal of money for the Air Ambulance by walking around her estate. But then I thought about the quiet courage of somebody like my sister, who cared for her severely disabled daughter for thirteen years, and had to endure the stares of strangers when she took her out in her wheelchair. Or of a woman who is terrified of going out, but still makes herself go to the shops to buy food for her family. So much courage goes unnoticed, and unrewarded, because we fail to understand the struggles of others.
Anne Brian

This website uses cookies to improve your experience while you navigate through the website. Out of these, the cookies that are categorized as necessary are stored on your browser as they are essential for the working of basic functionalities of the website. We also use third-party cookies that help us analyze and understand how you use this website. These cookies will be stored in your browser only with your consent. You also have the option to opt-out of these cookies. But opting out of some of these cookies may affect your browsing experience.
Necessary Always Enabled
Necessary cookies are absolutely essential for the website to function properly. These cookies ensure basic functionalities and security features of the website, anonymously.
Functional
Functional cookies help to perform certain functionalities like sharing the content of the website on social media platforms, collect feedbacks, and other third-party features.
Performance
Performance cookies are used to understand and analyze the key performance indexes of the website which helps in delivering a better user experience for the visitors.
Analytics
Analytical cookies are used to understand how visitors interact with the website. These cookies help provide information on metrics the number of visitors, bounce rate, traffic source, etc.
Others
Other uncategorized cookies are those that are being analyzed and have not been classified into a category as yet.
Advertisement
Advertisement cookies are used to provide visitors with relevant ads and marketing campaigns. These cookies track visitors across websites and collect information to provide customized ads.
SAVE & ACCEPT
Powered by